Raising global awareness of the importance of the contribution of vehicles to climate change is a key component of GFEI’s work. The initiative has been responsible for helping to shape a series of global processes on energy efficiency. These include the Sustainable Development Goals, the UN Framework Convention on Climate Change (UNFCCC), and the G20.

GFEI has been a significant proponent of the UN’s new focus on sustainable energy for all and climate change mitigation through SDG 7 and has played a major role in the Global Energy Efficiency Accelerator Platform, established to help drive action and commitments by leaders at national and sectoral level. GFEI’s commitment to support governments as they de-carbonise their vehicles will help move the agenda forward on energy efficiency. GFEI’s work in developing toolkits, policy options, data and technical capacity are critical in this respect.

GFEI contributed to the Transport Policy Brief on SDG 7 on Energy and its Interlinkages with other SDGs and the 2018 High Level Political Forum, GFEI released a new report highlighting progress in contributing to SDG7. 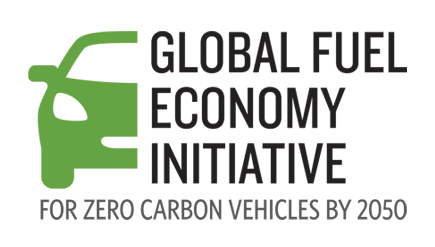 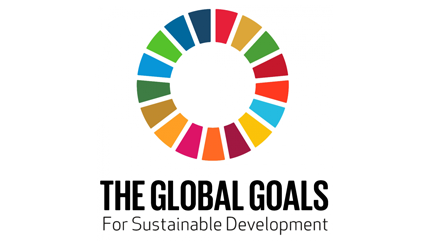 Global Goals
The UN in 2015 committed to seventeen Global Goals, a series of ambitious targets for everyone, to end extreme poverty and tackle climate change. GFEI's fuel economy work is directly relevant to goals 7 and 13, focused on improving energy efficiency and climate issues. 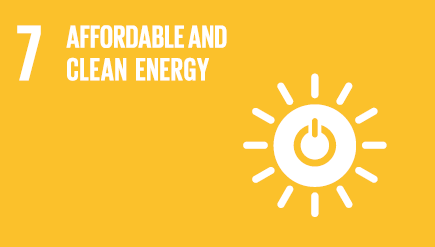 Global Goal 7
Goal 7 of the Global Goals aims to ensure access to affordable, reliable, sustainable and modern energy for all. As part of this, target 7.3 aims to double the global rate of improvement in energy efficiency. This includes vehicle fuel economy. 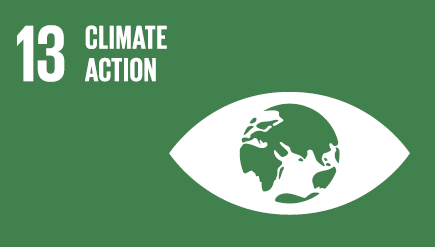 Global Goal 13
Goal 13 aims to take urgent action to combat climate change and its impacts. The transport sector is responsible for nearly a quarter of CO2 emissions, and improved fuel economy can help reduce this. 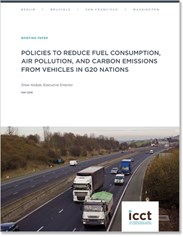 The Global Fuel Economy Initiative is supporting the International Partnership for Energy Efficiency Cooperation (IPEEC) transport taskforce to take forward the G20 Energy Efficiency Action Plan, a voluntary plan that was agreed at the Brisbane G20 meeting in Australia in November 2014, and which was subsequently re-affirmed by G20 Energy Ministers in Turkey in 2015. China, as the President of the G20 in 2016 is taking forward these issues.

The action plan aims to be practical and to strengthen voluntary energy efficiency collaboration in a flexible way. It currently consists of 13 participating economies in the transport work stream: Australia, Brazil, Canada, China, the EU, France, Germany, Italy, Japan, Mexico, Russia, the UK and the US. The plan states that participating countries should consider “further action in support of GFEI’s overall aim of improving fuel efficiency”.

In 2015, this work included developing recommendations for G20 consideration related to clean fuels, vehicle emissions and vehicle fuel efficiency, including strengthened domestic standards in G20 countries, in as many areas as possible. The action plan recognises that “While such standards are applied domestically, in accordance with differing national circumstances and priorities, international work can accelerate technical development of standards and testing regimes and facilitate voluntary harmonisation. Harmonisation of national standards helps reduce development costs for new vehicles and lessens the regulatory burden. This work will include collaboration and exchange of experiences and best practices on relevant national standards.”

The Global Fuel Economy Initiative is an implementing partner of the G20's Transport Task Group (TTG) and has provided analysis for G20 countries to inform further action to improve the fuel economy of vehicles, as have ICCT. The TTG has the shared goal of reducing the energy and environmental impacts of motor vehicles. Participating countries are invited to report on country progress on policy roadmaps and interim milestones to achieve world-class, domestic clean vehicle and fuels national policies and programmes by September 2016. 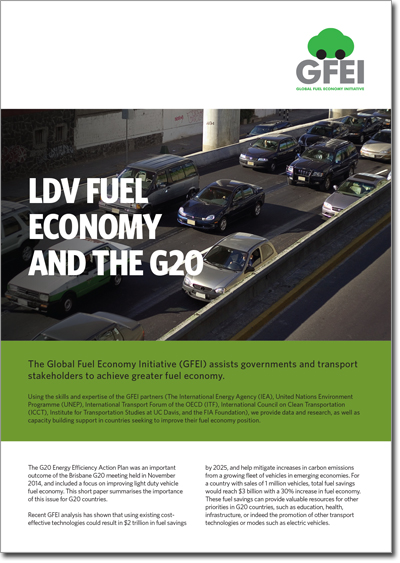 The G20 Energy Efficiency Action Plan was an important outcome of the Brisbane G20 meeting held in November 2014, and included a focus on improving light duty vehicle fuel economy.

This short paper summarises the importance of this issue for G20 countries.