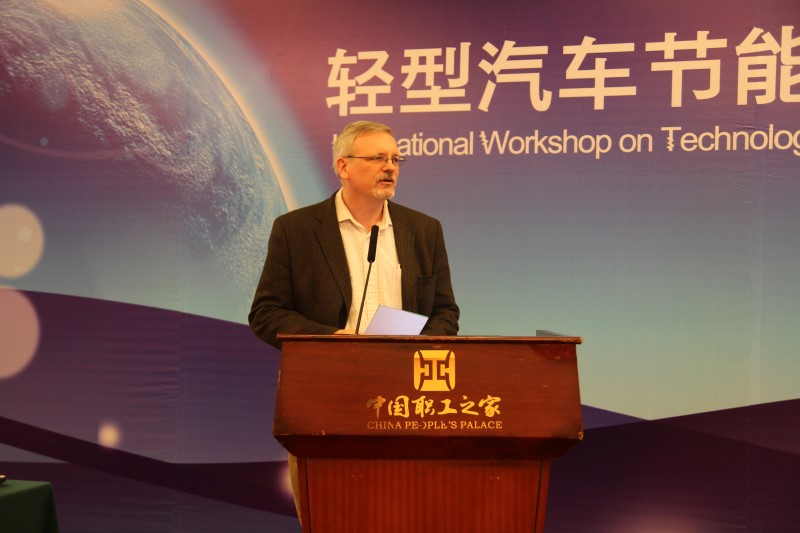 The conference was organized by the Global Fuel Economy Initiative, the International Council on Clean Transportation, and China’s Center for Automotive Technology and Research Center. Opening remarks were given by ZHANG Jianwei, the vice president of CATARC, and Lew FULTON, GFEI partner from UC-Davis, who discussed GFEI’s goal of doubling fuel economy of new passenger vehicle by 2030.

GFEI’s Lew Fulton and Chinese National Energy Bureau’s JIANG Kejun presented longer-term energy and technology outlook globally and for China. These talks provided the big pictures for NDRC and MIIT in China’s pathway towards significant fuel use and GHG reduction in longer run.

A major topic of research and discussion at the conference was the cost of compliance with China’s proposed fuel economy standards of 5 l/100km (117 g CO2/km; 47 mpg).  The ICCT and CATARC revealed results from a ground-breaking study that found that technology costs to achieve the recently proposed 2020 standards would be 7,000 RMB ($1,150 USD) which is substantially less than existing estimates (e.g., 16,000RMB).  The relevant government minister reacted positively to this new information, and asked industry representatives to respond if they disagreed. The representative from FAW raised several specific questions about assumptions related to hybrid costs and other underlying technologies. These will be addressed in subsequent dialogue with ICCT.

One particular technology – vehicle lightweighting – was discussed as a near- and longer-term pathway. In recent years, lightweight vehicle models have been commercially successful in the US and EU markets.  This commercial success has inspired Chinese automakers to look at this technology option as a way to meet China’s fuel consumption requirements. But the car makers are facing major obstacles. The current regulatory design in China does not provide regulatory credit for light weighting. FAW and SAE-China gave an overview of technology status in China and pointed out the need for fiscal incentives. The ICCT presented evidence that compliance cost fuel economy standards can be substantially reduced if lightweight technologies receive full regulatory credit. This work is considered extremely valuable by many of the manufacturers.

To further GFEI goal of dramatically improving vehicle efficiency, one outcome of the workshop will be a policy briefing paper by ICCT and CATARC jointly to the key officials from MIIT, NDRC and State Council. The policy brief will summarize key findings from ICCT cost curve research that the ministries can use for gathering feedback from the industry. Such independent third party and detailed research work has never been incorporated in the Chinese rulemaking before and therefore will be very valuable for future policy development. A possible longer-term outcome of the initiative will be the incorporation of the new cost estimates into government forecasts for the 2020 proposed standards, and future standards in 2025.