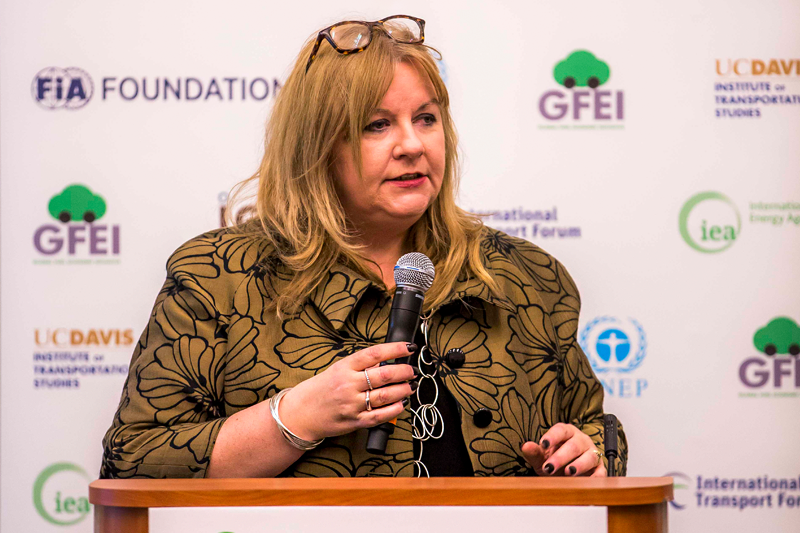 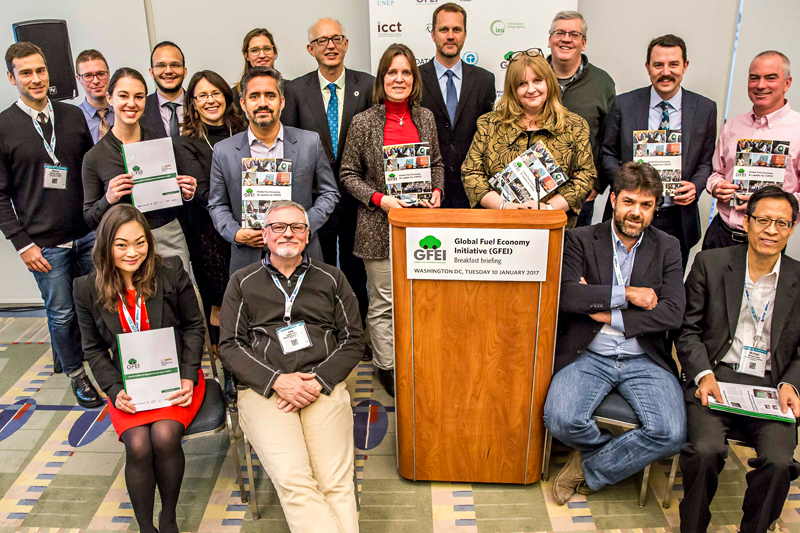 Participants at the breakfast event at the Transport Research Board (TRB) annual meeting held in Washington D.C.

The Global Fuel Economy Initiative (GFEI) launched a major milestone of fuel economy analysis at a breakfast event at the Transport Research Board (TRB) annual meeting held in Washington D.C. on Tuesday 10th January. Pierpaolo Cazzola (pictured above) of the International Energy Agency (IEA) and lead author of the report shared the wide-ranging analysis which includes new data on fuel economy trends over the past decade (2005-2015).

The new report extends and enhances previous research that GFEI has published regularly since 2011, by including longer time series, an updated in-depth exploration of fuel economy drivers and a new section on trends in vehicle prices globally. The report is also unique in its scale and comprehensiveness, covering more than 80% of the global vehicle market.

Sheila Watson, GFEI Executive Secretary and Deputy Director of the FIA Foundation introduced by setting out the progress that the GFEI partnership has made since it formed in 2009, and how this latest data gives new insights into the impact of recent fuel economy policies around the world. She welcomed the eminent transport policy and technical vehicle experts who were participating in the event as part of the TRB conference, and summarised the report’s main findings as ‘fuel economy policies work, but more action is needed’, drawing attention to the ongoing work that GFEI partners are undertaking to raise awareness of the importance of fuel economy, such as at the recent COP22 meeting in Marrakech, and the forty new countries that have jointed the initiative since the Paris Agreement in December 2015.

Pierpaolo Cazzola, Energy Technology Policy Analyst at the IEA, presented the new benchmarking analysis of 10 years of data from 2005 to 2015. The analysis highlights that while average fuel economy is continuing to improve, the rate of improvement has been slowing down in recent years. The average amount of fuel required to travel 100 km fell from 8.8 Lge (litres of gasoline equivalent) in 2005 to 7.3 Lge/100km in 2015. Between 2005 and 2008 the improvement rate was 1.8%, but between 2014 and 2015 the rate of improvement had slowed to 1.1%. This reflects changes in the composition of sales globally, including increased sales in non-OECD markets and shifts occurring within the OECD, and comes in conjunction with a major change in comparison with the first half of the last decade: since 2014, non-OECD countries have achieved faster fuel economy improvements than the total of all OECD economies.

The report shows that Light Duty Vehicles (LDVs) sold in OECD countries use less fuel (at same power) than those marketed in non-OECD countries. This suggests that there is a technological gap in engine technology deployment between OECD and non-OECD countries. Yet, fuel use per km in North America and Australia still exceeds the values observed in the non-OECD. This is primarily imputable to a high proportion of LDV sales with large power and displacement engines, heavy weight and a large footprint, in comparison with the global average.

The IEA’s new analysis sheds new light on global fuel economy trends. Pierpaolo Cazzola showed that there is evidence that ambitious policy frameworks, including fuel economy standards and differentiated taxation by fuel economy (such as the EU regulation on emissions per km and Brazil’s Inovar-auto scheme, introduce in October 2012) are linked with improved fuel economy. Fuel economy improvements took place despite an increasing shift globally towards ‘crossover’ vehicles (medium sized SUVs and pick-ups), as part of an overall trend towards larger vehicles that strengthened since 2010 and is slowing improvements in average fuel economy. Examples from detailed country sheets included in the report also show that, in the absence of policies, the tendency is for most vehicle attributes (including fuel economy) is to stagnate.

For the first time the analysis includes a comparative assessment of vehicle prices. This identified significant differences in vehicle prices across the main markets, with vehicles sold in the OECD and China having prices well above LDVs marketed in Brazil, India and Mexico. The analysis of prices against other vehicle attributes showed also that, even if consumers already pay a price premium for efficiency, achieving fuel economy reductions may come at a lower cost for consumers if efforts are focused on larger vehicle segments and power classes, where fuel economy performance has a secondary importance in the determination of vehicle prices. This suggests that provisions requiring greater relative fuel economy improvements in these classes offer more opportunities to avoid the passing the full cost of fuel economy improvement over to consumers. The paper recommends that they should therefore be favoured.