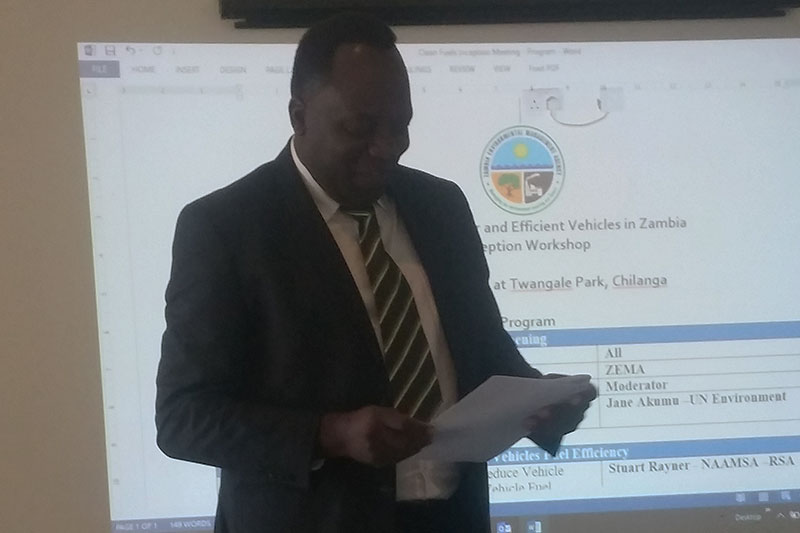 A national workshop to kick off vehicle fuel economy activities in Zambia was held on 24 August 2017 in Lusaka, Zambia. The workshop was organised by the Zambian Environmental Management Agency (ZEMA), and supported by the Global Fuel Economy Initiative through UN Environment with funding from the FIA Foundation.

Close to 30 participants from various agencies responsible for transport, energy, environment and finance were in attendance. The workshop was opened by the Director General of ZEMA, Mr. John Msimuko. Also in attendance, were Stuart Rayner of the National Automobile Association of South Africa and Jane Akumu of UN Environment.

Participants were informed that the vehicle population in Zambia had tripled in the last 9 years, with an 8% average growth rate recorded between 2008 and 2016. Even though the country does not have age restriction on imported vehicles, the government has introduced taxation to support imports of cleaner and more fuel efficient vehicles. In addition to import, excise and value added tax for newly imported vehicles, a carbon emission tax that is based on vehicle engine capacity is also levied and a flat tax of 2,000 kwacha on vehicles that are older than 5 years.

As a follow up to the vehicle fuel economy kick off workshop, Zambia will now prepare an inventory of the fuel economy of vehicles imported into the country over time. The inventory results will be presented to stakeholders towards the end of the year.