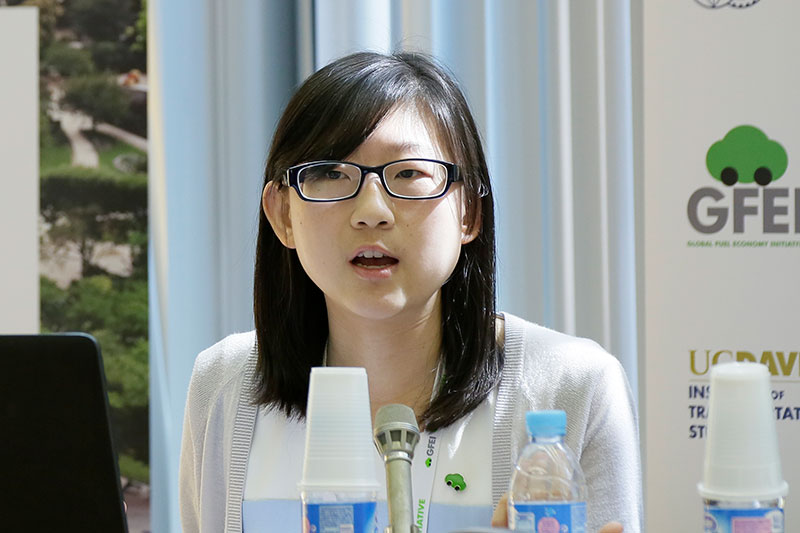 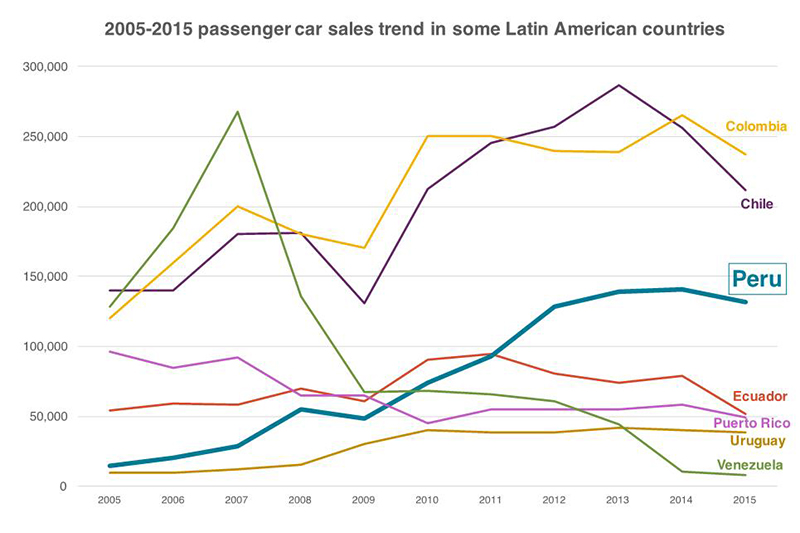 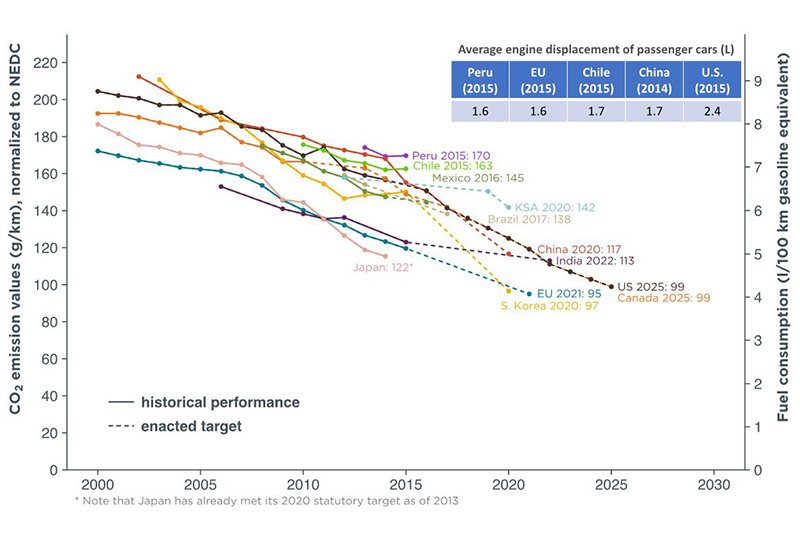 Peru has the fastest growing passenger car fleet in Latin America, thanks to the country's strong economic growth. From 2005 to 2015, annual sales of passenger cars increased more than 9 times, a 25% annual rate of increase. And this trend is likely to continue. (see Figure 1)

Peru has made significant progress on controlling pollutant emissions from all those vehicles. Most recently, the Ministry of Environment (MINAM) ruled that as of April 1, 2018, all vehicles sold in Peru must meet Euro 4/IV equivalent emission standards. And the Ministry of Energy and Mines has lowered the permitted sulfur content in diesel and gasoline to 50 ppm, a move that will maximize the effectiveness of advanced emission-control technologies.

To date, there has not been comparable policy action on reducing vehicle fuel consumption, and consequently the country is at risk of falling behind global trends toward more fuel-efficient vehicle fleets. In 2013, Peru's passenger car fleet was similar, in terms of average fuel efficiency, to those of China, the United States, Canada, and Korea. But even in just three years a divergent trend is apparent (see Figure 2) as Peru's average fuel efficiency stagnates while other markets are driving fuel consumption and CO2 emissions down by means of tightening standards.

According data collected by the Centro Mario Molina Chile, the average engine size of Peruvian passenger cars is similar to those in the European Union, Chile, and China, and is far smaller than the U.S. fleet. If its vehicle fleet also adopted advanced efficiency technologies, Peru could achieve a level of average fuel consumption comparable to other markets. And all vehicles sold in Peru are imported from other countries, which means Peru could upgrade its fleet quickly with more efficient technologies as those technologies mature elsewhere.

Feebates are a fiscal policy tool that has proved effective elsewhere in reducing vehicle fuel consumption. In a feebate system, a vehicle buyer receives either a tax or a rebate based on the vehicle's fuel consumption or CO2 emissions. Gas-guzzling, high-CO2-emitting vehicles pay fees, while more efficient vehicles receive rebates. The difficulties that Peru must overcome in order to reduce vehicle fuel consumption don't restrict its ability to design and adopt a good feebate program. On the contrary, they constitute a compelling argument in favor of using a feebate program in Peru and other countries facing similar challenges.

Compared to mandatory efficiency standards, a feebate program is easier to establish. Much less data and expertise are required at the outset. It's also simpler to administer and enforce: manufacturers can self-certify fuel consumption value, and government can build up capacity to conduct confirmatory testing as the program goes along. A feebate system works well for imported vehicles, and provides continuous incentive for importers to import vehicles with advanced technologies. And with proper design a feebate system can be either revenue-raising or revenue-neutral.

Peru is committed to Global Fuel Economy Initiative (GFEI) “100 for 50 by 50” campaign, and the Peruvian government intent on reducing vehicle fuel consumption. That may open policy windows to accelerate the adoption of efficiency technologies. Peru's neighbor Chile has taken a variety of actions aimed at reducing vehicle fuel consumption: established a passenger-vehicle tax system based on CO2 and NOx emissions, created a fuel-consumption labeling program to raise consumer awareness, and built up testing capacity to certify fuel consumption of vehicles sold in the country. In 2018, Peru is likely to see more interagency discussion on policy strategies to reduce fuel consumption from vehicles. We look forward to learning what will happen next.