May 3, 2018 by Global Fuel Economy Initiative 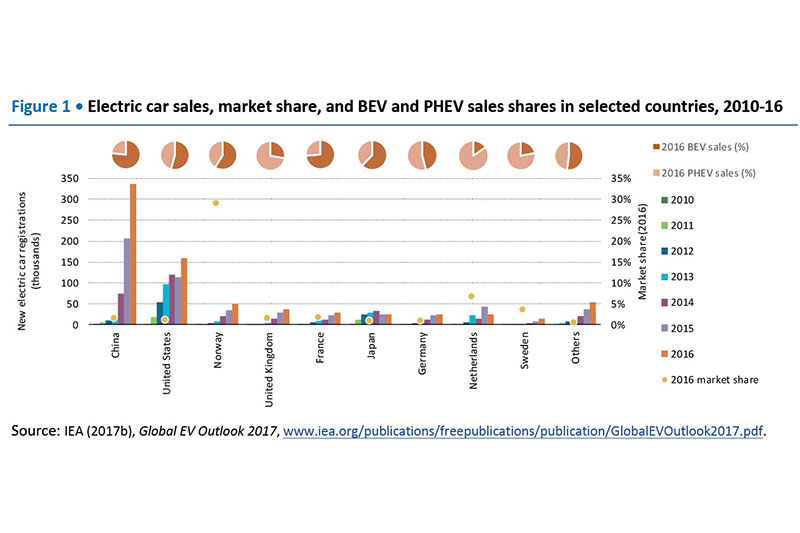 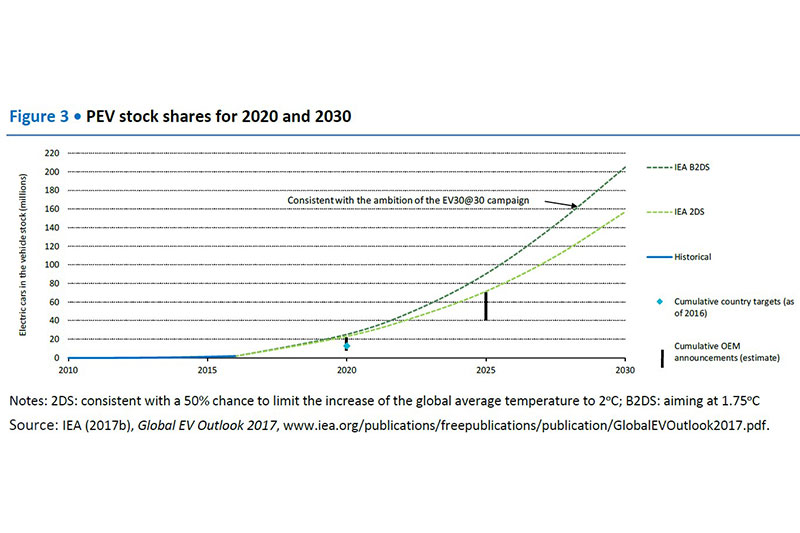 PEVs also present significant benefits in terms diversification of the transport energy mix, the reduction of local pollution and greenhouse gas emissions, as well as in facilitating the transition to a clean energy system.

GFEI has set its target ‘50by30’ to double the average fuel economy of new light duty vehicles (LDVs) globally by 2030 compared to 2005 figures. This means reducing fuel consumption by 50% (in litres per 100km) and halving carbon emissions in grams of CO2 per kilometre. The target was set in 2010, based on assessments that it could be met using cost effective technologies without full electrification. However, GFEI partners welcome the swift developments in electric technology since this goal was set, and support the wider roll-out of PEVs to improve vehicle efficiency, which will enable countries to more easily achieve the GFEI target and, ultimately, the climate change targets set in Paris in 2015. PEVs are up to three times as efficient as conventional internal combustion engine (ICE) powered cars, and almost twice as efficient as hybrid car which alternate between the two systems.

The rise in the sales of PEVs has been sharp, rising by a third from 750,000 new vehicles worldwide in 2016, to close to 1 million in 2017. Growth has been driven by a number of factors, including falling battery costs and a shift in policy across the globe:

Other countries have focused on phasing out new ICE sales - Norway and the Netherlands have a stated ambition to phasing out ICE car sales by 2030 while France and the UK announced similar plans for the year 2040.

The main barriers to PEV market penetration are the purchase cost, the limited availability of models, alongside limitations to the driving range and recharging time. There have been a number of recent developments, with several models now boasting a driving range of 300 km or more. Ensuring that charging stations are available for EV owners is also an important consideration, with deployment rates that vary significantly from country to country.

The promising prospects for the PEV market dynamics should not be seen as an alternative to efficiency improvements of the internal combustion engine, but should rather be seen as a complementary instrument to achieve greater vehicle efficiency overall.

The overall benefits of electrification will also need to be supported by a transition to low carbon electricity to ensure that they fully deliver on GHG emission abatements: the transition to sustainable transport needs to take place hand-in-hand with the clean energy transition.

Sheila Watson, Director of Research and Deputy Director of the FIA Foundation, said: “The growth of the electric vehicle market has the potential to boost the efficiency revolution in vehicles which we need to see in our transition towards a greater reliance on low-carbon transport. However, policies that support the uptake of electric mobility only lead to fewer carbon and pollutant emissions if accompanied by renewable energy-based decarbonisation of the electricity sectors – sustainable mobility for all and sustainable energy for all must come together.”

Pierpaolo Cazzola, Analyst at the International Energy Agency, said: “The transition to electric mobility has many positive implications for energy diversification, air quality and GHG emission mitigation, and strong synergies with fuel economy policies. The decision of GFEI partners to support the roll-out of electric vehicles to help reach the GFEI target is good news for sustainable transportation and clean energy”.