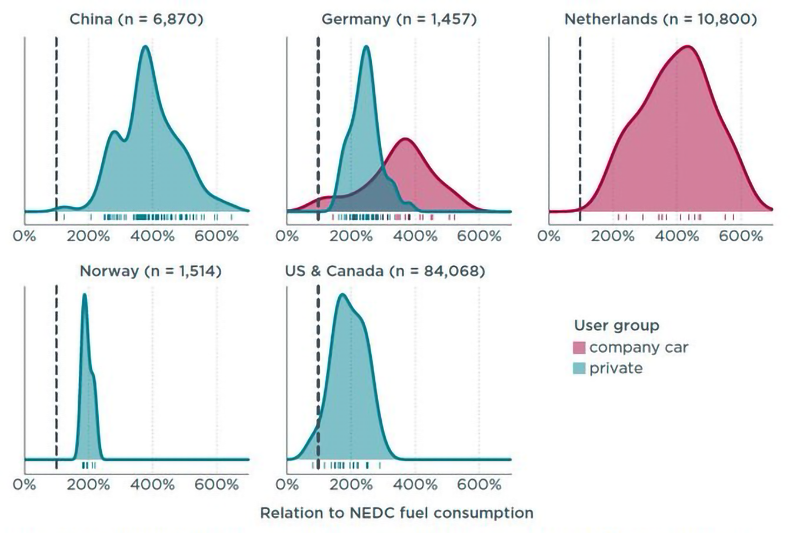 Distribution of real-world fuel consumption in relation to NEDC test cycle. Shown is the distribution by country. The vertical dashed line at 100% corresponds to real = test cycle. Private users in blue and company car users in red. Small rugs next to the x-axis indicate individual observations at PHEV model variant level. Total number of vehicles in the sample is included by country. 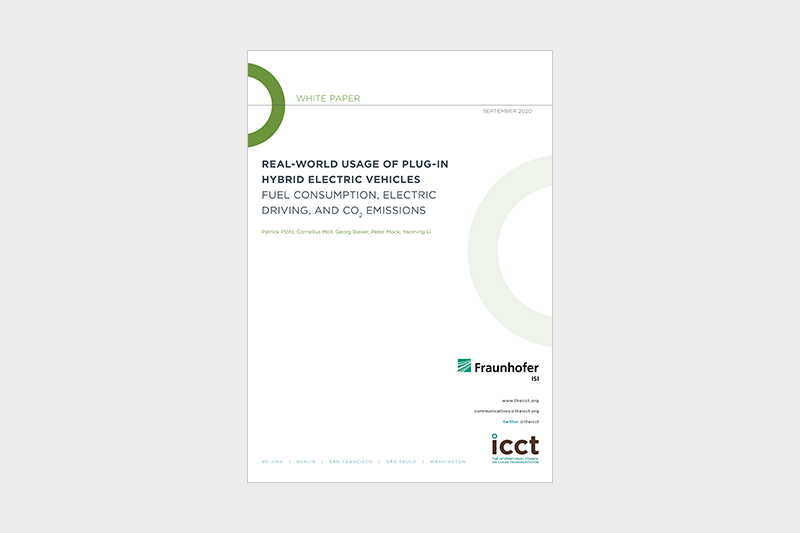 Plug-in hybrid electric vehicles (PHEVs), which combine an electric and a conventional combustion engine drive train, offer the potential to reduce global greenhouse gas (GHG) emissions and local air pollution if they drive mainly on electricity. However, there is limited evidence on how much driving PHEVs actually do on electricity and how much conventional fuel they use in real-world operation. ICCT’s White Paper undertook analysis of real-world usage and fuel consumption of approximately 100,000 PHEVs in China, Europe, and North America and came to the following main findings:

PHEVs electrify many kilometers per year. Most PHEVs have type-approval all-electric ranges of 30–60 km and electrify 5,000–10,000 km a year. PHEVs with high all-electric ranges of 80 km or more achieve 12,000–20,000 km mean annual electric mileages, which is comparable to the annual mileage of the car fleet in Germany and the United States. The high annual electric kilometers reflect high annual mileages of PHEVs despite low UFs. The share of kilometers that PHEVs electrify results in a total of 15%–55% less tailpipe CO2 emissions compared to conventional cars. This is much lower than expected from type-approval values.

Decreasing combustion engine power while increasing all-electric range and frequency of charging improve real-world fuel consumption and CO2 emissions of PHEVs. Real-world fuel consumption and CO2 emission levels decrease by 2%–4% with each 10 kW of system power taken out of a PHEV. At the same time, adding 10 km of all-electric range improves real-world values by 8%–14%.