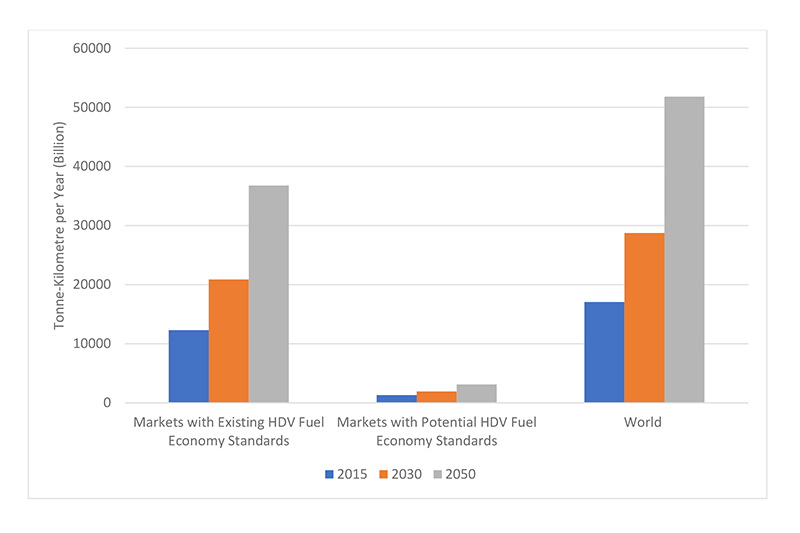 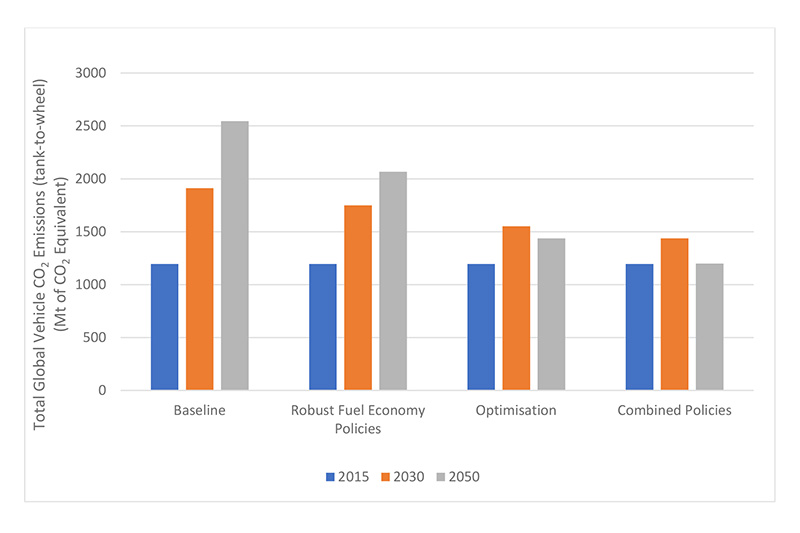 Road freight transport system efficiency could be doubled by 2050 by combining fuel economy standards with targeted logistical policies, according to new modelling in the GFEI Working Paper 23 by GFEI partner, the International Transport Forum.

The report identifies that optimisation alone would reduce CO2 emissions by a fifth (20 percent) by 2030 and 44 percent by 2050. More robust fuel economy policies, assuming a 50 percent increase in standards by 2050 in countries with existing standards, could result in a 9 percent and 20 percent improvement by 2030 and 2050, respectively. Crucially, both these interventions alone, while offering improvements, would not deliver the stalling of CO2 emissions to 2015 levels while set against increased freight activity.

However, coupling fuel economy standards with vehicle and route optimisation policies could cut total CO2 emissions by a quarter (25%) against projected increases by 2030. The gains by 2050 were even more impressive. The modelling compared baseline CO2 emission projections without further interventions with 3 scenarios: the impact of robust fuel economy policies alone; the impact of vehicle optimisation alone; and the impact of combining the two interventions. The latter combined policy approach was the only scenario where emissions in 2050 would be similar to the 2015 level, a reduction of more than half against projected increases with no action.

The global sector, especially long-haul heavy-duty trucking, is also one of the hardest transport modes to change, as design standards including weight and size vary markedly by region, and trucks are often designed according to task-specific requirements and the weight and shape of cargo. Currently, just six markets - Canada, China, Japan, the United States of America (USA), India and the European Union (EU) - have fuel economy standards for HDVs in place, while South Korea, Mexico and Brazil are considering similar standards. The total road freight demand in these nine markets alone made up 80 percent of global road freight demand in 2015 and 83 percent of CO2 emissions of global road freight fleet.

Sheila Watson, FIA Foundation Deputy Director, said: “This report highlights the significant impact of the global road freight fleet on global emissions targets and the clear imperative to curb the predicted growth in emissions. The combined activity recommended in GFEI’s Working Paper 23 shows that there is no single silver bullet to solve this complex problem. Instead, a combination of policies offers the best chance to limit CO2 emission increases from the freight sector in a significant and meaningful way.”