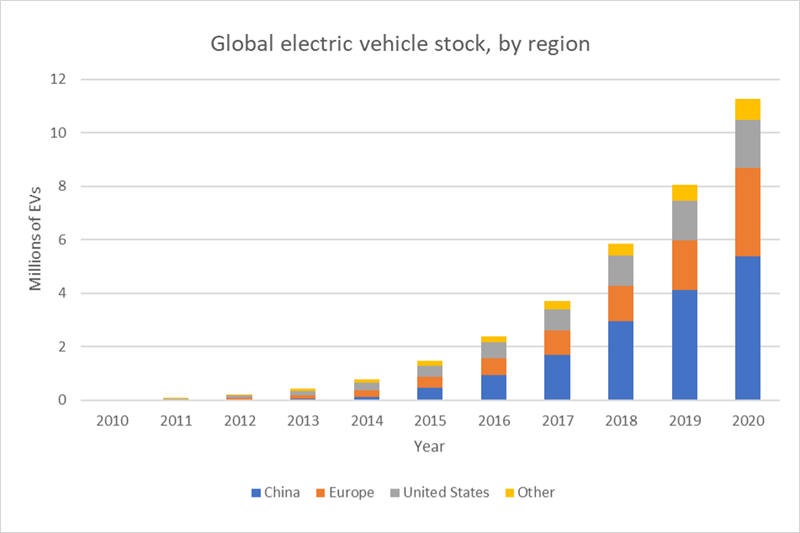 The total stock of electric vehicles globally continues to rise and now exceeds 10 million, with the highest numbers in Europe and China.

A new report from GFEI partner the IEA reveals that by the end of 2020 there were 10 million electric cars on the world’s roads. The Electric Vehicle (EV) Outlook 2021 shows that EV registrations increased by 41% in 2020, despite the pandemic-related worldwide downturn in car sales, with global car sales dropping 6% overall. Around 3 million electric cars were sold globally in 2020 (a 4.6% sales share), and Europe overtook China as the world’s largest EV market for the first time.

In Europe, new electric car registrations more than doubled to 1.4 million representing a sales share of 10%. Electric cars in Norway reached a record high sales share of 75%, up about one-third from 2019. Sales shares of electric cars exceeded 50% in Iceland, 30% in Sweden and reached 25% in the Netherlands.

EVs are two- to four-times more efficient than conventional internal combustion engine (ICE) models, and can lead to significant climate and air quality benefits. The report highlights the reasons for strong momentum in EV markets despite the pandemic. These were:

The EV Outlook also estimates that based on current policies, the number of EVs on the road globally could reach 145 million by 2030. However, with greater policy efforts to put the world on track to meet climate goals, the number could rise even higher – with the potential to reach 230 million vehicles in 2030 – which would lead to EVs making up 12% of all vehicles on the road. The exact carbon savings from these vehicles depends in part on the extent to which the electricity grid decarbonises, but the IEA estimate that switching from Internal Combustion Engine (ICE) vehicles to EVs can reduce per vehicle emissions by between one third and two thirds.

Future growth depends in part on decisions by manufacturers and consumers as well as governments. Out of the world’s top 20 vehicle manufacturers, which represented around 90% of new car registrations in 2020, 18 have stated plans to widen their portfolio of models and to rapidly scale up the production of light-duty electric vehicles. The model availability of electric heavy-duty vehicles is also broadening, with four major truck manufacturers indicating an all-electric future.

Consumer spending on electric car purchases increased to USD 120 billion in 2020. In parallel, governments across the world spent USD 14 billion to support electric car sales, up 25% from 2019, mostly from stronger incentives in Europe. However, as a proportion of total spending on EVs, this share of government incentives has decreased over the past five years, suggesting that EVs are becoming increasingly attractive to consumers.

The report also features information about the electric heavy-duty vehicle models coming onto commercial markets in the coming few years, and the status of development of megachargers. Governments will also need to put in place policies to promote the roll-out of zero-emission vehicles in the medium- and heavy-duty vehicle segments and the corresponding fast-charging infrastructure. The number of electric light-commercial vehicle (LCV) reached 435 000 units in 2020. About a third of these are in Europe where new electric LCV registrations in 2020 were only 5% below those in China, the world leader. In Europe, electric LCV registrations jumped almost 40% in 2020 from the prior year to exceed 37 000 units.

In the short term, countries can continue to implement, enforce and tighten measures such as CO2 and fuel economy standards and EV mandates. Taxing gasoline and diesel at rates that reflect their environmental and human health impacts can provide government revenue, reduce their negative impacts and hasten the transition to electric mobility. Differentiated taxation of vehicles and fuels that reflect their environmental performance can further align markets with the climate benefits of EVs.

The outlook for EV sales looks strong. In the first-quarter of 2021, global electric car sales rose by around 140% compared to the same period in 2020, driven by sales in China of around 500 000 vehicles and in Europe of around 450 000. US sales more than doubled relative to the first-quarter of 2020, albeit from a much lower base. However, the EV Outlook makes it clear that the challenge is still enormous, and the strong policies are needed. For EVs to unleash their full potential to combat climate change, the 2020s will need to be the decade of mass adoption of electric light-duty vehicles. In addition, specific policy support and model expansion for the medium- and heavy-duty vehicle segments will be crucial to mitigate emissions and make progress toward climate goals.