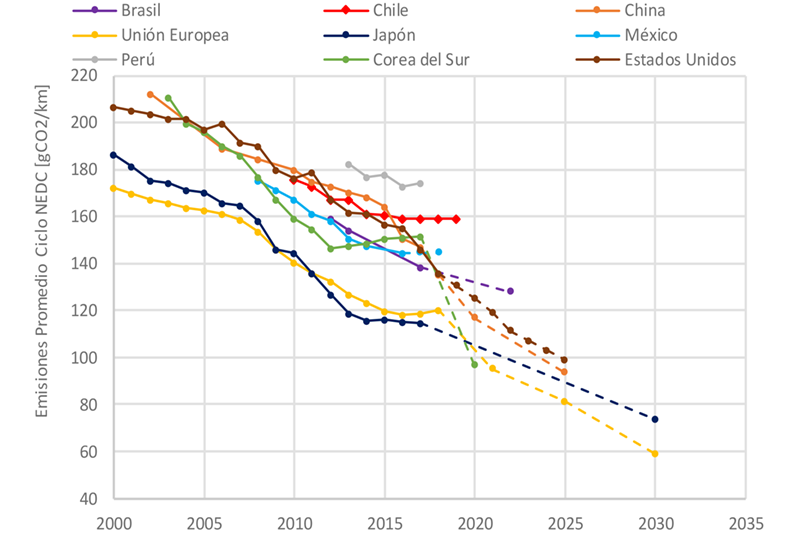 Analysis shows that the CO2 emissions from vehicles has stagnated in recent years, which is why the new energy efficiency law is needed.

In February 2021, Chile continued its efforts to cut emissions and achieve carbon neutrality by 2050 through the adoption of country’s first Energy Efficiency Law. This follows over a decade of collaboration with the Global Fuel Economy Initiative.

Chile was one of four pilot countries who started working with GFEI in 2009 and completed a baseline analysis of vehicle fuel economy in 2010. As a result, it became the first country in Latin America to adopt fuel economy vehicle labeling in 2013, and subsequently introduced a green tax in 2014, targeting carbon emissions.

The law requires the Ministry of Energy to prepare a national energy efficiency plan every five years. The first plan is required to address the goal of reducing the energy intensity by at least 10% by 2030 compared to 2019 and should lead to cumulative savings of US$15.2 billion and reduce CO2 by 28.6Mt. This is equivalent to avoiding the annual journey of 15.8 million light vehicles or the annual absorption of 1.8 million hectares of native forest (Ministry of Energy).

The main contents of the Article 7 of the Law relate to the Transport sector and include:

The Ministry of Energy will regulate the interoperability of the electric vehicle charging system. This, to facilitate the access and connection of electric vehicles to the charging network, allowing a harmonious development, which ensures free access to public chargers.

The interoperability regulation will be issued within a period of twelve months, from the publication of this law.

Fully electric vehicles, plug-in hybrids and zero emissions of companies can have accelerated depreciation for a period of ten years following the entry into force of the law (3 years normal useful life and 1 accelerated year).

Hydrogen is expressly declared as a fuel and gives the Ministry of Energy powers to regulate it and treat it as an energy resource.

Law 21305 on Energy Efficiency - Minister of Energy (In Spanish)