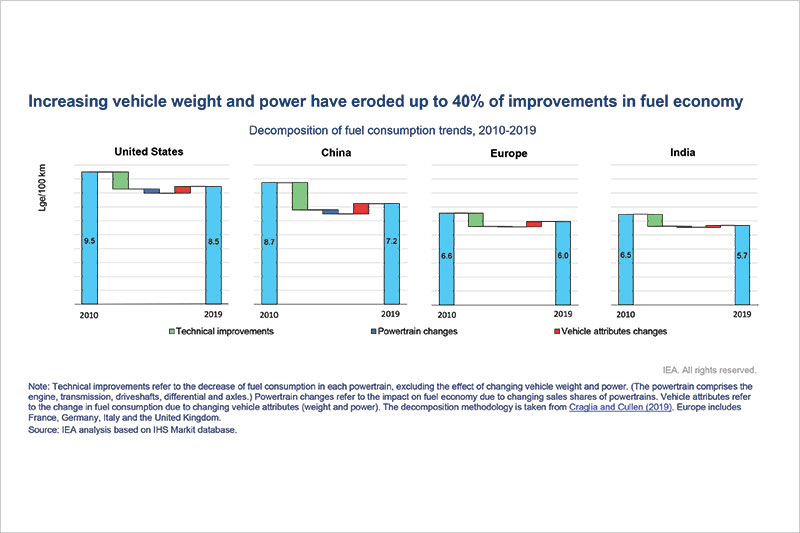 Increasing vehicle weight and power have eroded up to 40% of improvements in fuel economy. 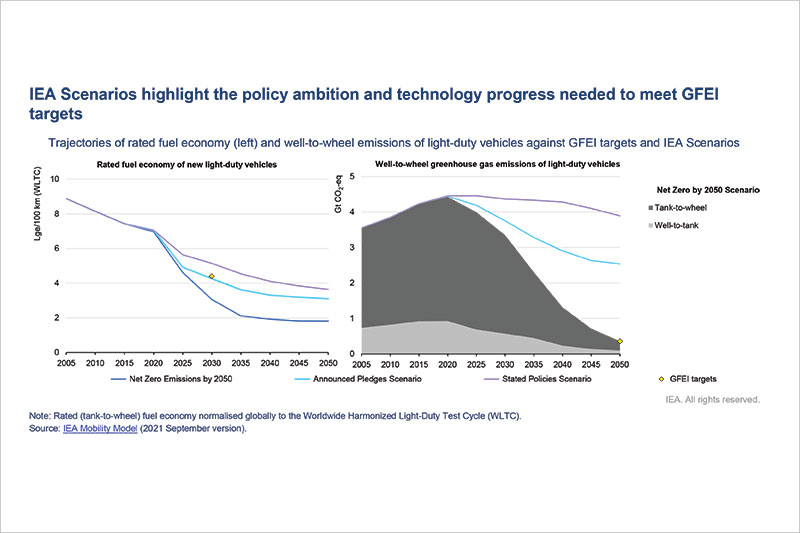 This report shows that over the past decade, the rate of fuel economy improvement in major markets has stalled and that there must now be a rapid shift to electric vehicles. to achieve the levels of CO2 reductions needed to achieve the Paris Agreement targets According to this analysis of almost 90% of global light-duty vehicle sales, between 2017 and 2019, average rated fuel consumption of new light-duty vehicles fell by only 0.9% - far less than the 1.8% annual average reduction between 2010 and 2015. Increasing vehicle weight and power were a major impediment to further improvement - SUVs made up 44% of all light duty sales in 2019 – eroded up to 40% of improvements in fuel economy.

The report also shows that the right policy frameworks have a clear and significant impact on vehicle emissions. Between 2017 and 2019, average rated fuel consumption rose in Europe. From 2020, when the European Union’s CO2 emission regulations started to require further improvement, rated emissions from new vehicles declined by more than 10% year-on-year. In the United States, the average fuel consumption of new light-duty vehicles remained unchanged between 2017 and 2019, following a relaxation of fuel economy standards. In contrast, average fuel consumption improved in China, driven by tightening fuel economy standards there.

The report for the first time includes a well-to-wheel analysis, which confirms that battery electric vehicles have the lowest greenhouse gas emissions, followed by plug-in hybrids and hydrogen fuel cell electric vehicles. Hybrid vehicles have the lowest well-to-wheel emissions among compressed natural gas, diesel and gasoline internal combustion engines. Moreover, CO2 emissions fell faster than fuel economy between 2017 and 2019 - global average rated CO2 emissions in 2019 were 167 grammes of CO2 per km (g CO2/km), a 1.6% decrease from 2017 - because market penetration of electric vehicles rose.
The report concludes that the cuts in emissions needed to meet Paris goals can only be achieved by stronger policies that increase the market shares of electric cars as well as global adoption of state-of-the-art efficiency technologies in internal combustion engines.

Other conclusions of the report include:

Sheila Watson, Deputy Director of the FIA Foundation, said: “This is a very disappointing picture of inadequate progress in this vital area of energy efficiency. Whilst it is clear that battery electric vehicles present the best option for cleaning up the world’s vehicle fleet, this will not happen without proper policy support, alongside measures which address the impact of the remaining new and secondhand internal combustion powered fleet. This report is a timely reminder of how little we should take for granted in terms of this vital transition towards a transformed global fleet, and the vital importance of the GFEI’s work in achieving the Paris Climate Agreements.”

The findings of this report are also incorporated into the new GFEI zero pathway report which will be launched ahead of COP26 Transport Day.