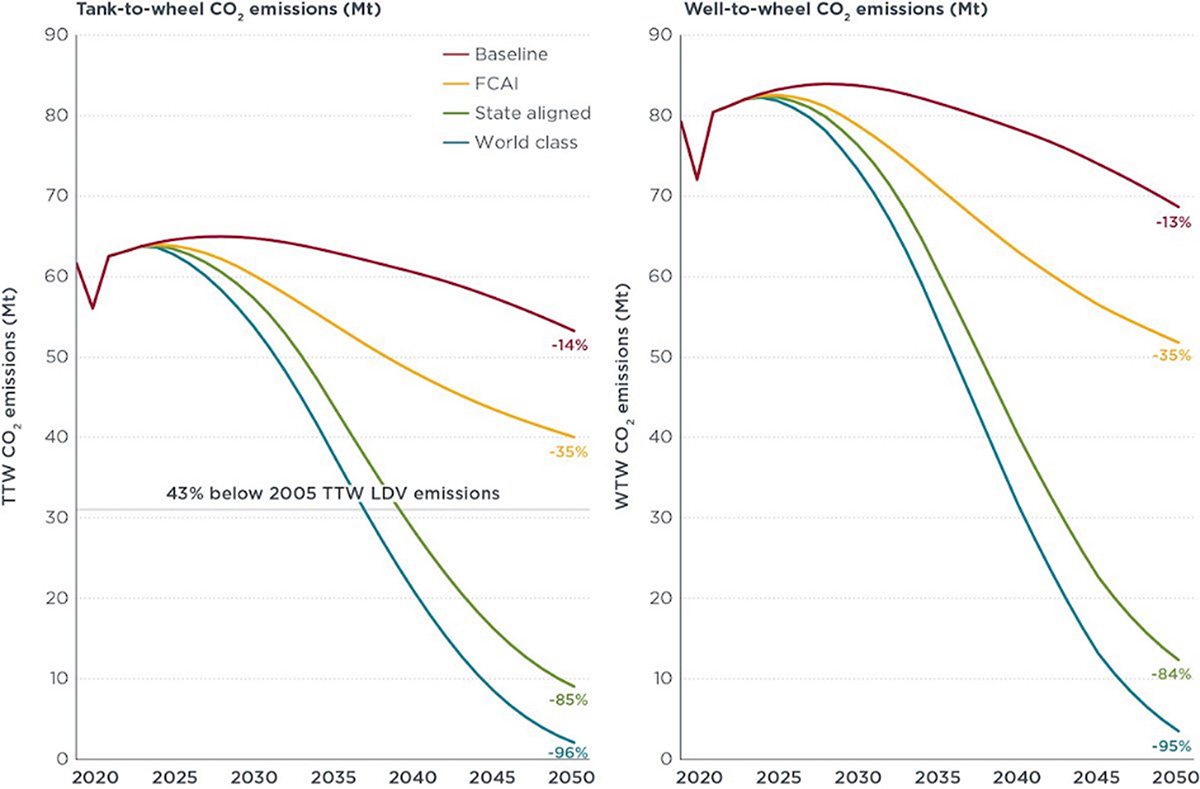 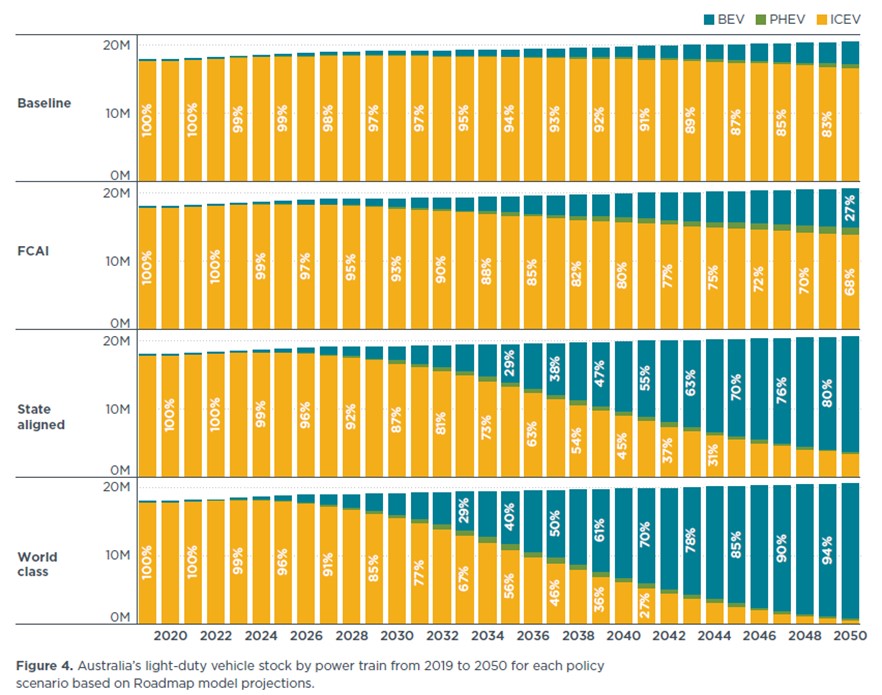 Australia’s light duty vehicle stock by power train from 2019 to 2050 for each policy scenario based on model projections.

Australia is one of the few major markets, alongside Russia, that currently lack fuel economy standards. Transport is the third largest source of greenhouse gas emissions in the country and improving vehicle efficiency is vital if Australia is to meet its target of achieving net zero by 2050.

The Australian government recently started a public consultation seeking inputs on introducing mandatory national fuel efficiency standards. To inform this, GFEI partner the International Council on Clean Transportation (ICCT) undertook analysis to understand the potential impact of different approaches. This continues a longstanding process of engagement that GFEI partners have had with Australia for over a decade, including a high-level seminar and policy submission on the country’s emission standards discussion paper in 2011 and a 2017 ICCT briefing paper.

Since 2017, all LDVs introduced in the Australian market have been imported, and the majority of these vehicles are new. The major sources of vehicle imports to Australia are Japan, Thailand, South Korea, the European Union, and China. Average emissions in Australia are generally higher emitting than in other major markets that have fuel efficiency or CO2 standards in place.

ICCT’s analysis involved constructing and modelling four scenarios: a business-as usual scenario without any standards; a scenario corresponding to existing voluntary CO2 emissions targets set by Australia’s Federal Chamber of Automotive Industries (FCAI); a scenario corresponding to existing state-level electric vehicle targets; and a scenario that reflects world-class ambitions, including zero-emission vehicles as 100% of new sales by 2035. These scenarios were then combined with projections of vehicle sales and the carbon intensity of the electricity grid.

The results indicate that by aligning with world-class standards like those already adopted in the European Union, New Zealand, and California in the United States, Australia can almost fully decarbonize its LDV fleet by 2050. Implementing such standards starting in 2024 could reduce well-to-wheel CO2 emissions from the LDV fleet in Australia by 95% in 2050 compared to 2019. A less ambitious national standard that matches existing state-level electric vehicle targets would reduce well-to-wheel CO2 emissions from the LDV fleet by 84% in 2050 compared to 2019 but would allow 165 Mt more CO2 emissions from 2019 to 2050 than world-class standards.

The analysis also show that the voluntary CO2 emissions targets set by the vehicle manufacturers’ group FCAI are not stringent enough to spur emissions reduction from internal combustion engine vehicles (ICEVs) if state electric vehicle targets are met. This would allow ICEVs to dominate Australia's vehicle stock even in 2050, with EVs making up just 32% of new LDV sales by 2030.

ICCT’s passenger vehicles program lead and co-author of the paper, Zifei Yang said “It’s abundantly clear that emission standards would be effective in driving significant reductions in CO2 emissions from Australia’s fleet, and they can promote both electric vehicles and emissions reduction from internal combustion engine vehicles (ICEVs).”