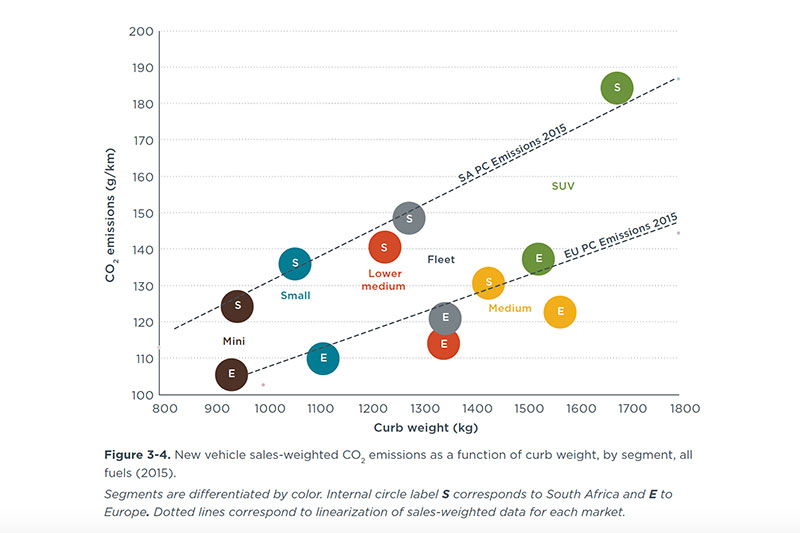 Comparison of South African and EU passenger vehicle emissions in 2015.

South Africa’s new passenger vehicle fleet is the largest on the African continent and the 18th largest globally. South African manufacturers sold more than 412,000 new vehicles in 2015, and exported more than 333,000 units in that year. Although domestic new vehicle sales have been impacted by economic and political instability in the last couple years, the sheer size of the young South African population and expected economic growth points to a projected growing fleet of private vehicles, with significant impacts in terms of CO2 emissions and fuel consumption.

A new report, led by GFEI partner the International Council on Clean Transportation (ICCT), provides a transparent assessment of the current new passenger vehicle market in South Africa in terms of CO2 emissions, and provides an evaluation of the benefits of adopting fuel economy and CO2 emission standards in those vehicles. It follows a series of workshops that ICCT have led in South Africa over the past couple of years. The report is intended to inform South African policymakers and domestic stakeholders, as well as an interested international audience, on the fuel savings that could be achieved with the adoption of said standards.

A model was developed to assess the impact of each scenario in terms of total CO2 contributions. The model shows significant benefits of adopting CO2 standards, even in the face of a larger fleet:

These represent a 12% and 28% reduction with respect to the baseline scenario. The results show the large potential of fuel economy/CO2 emission standards to decarbonize the passenger vehicle market.