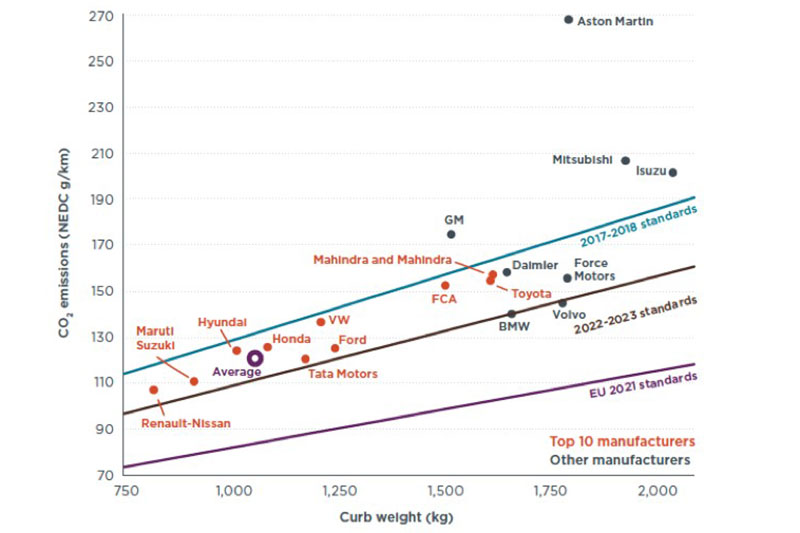 India’s vehicle efficiency standards will have to tighten significantly to keep pace.

The transition to Bharat VI emission standards in India is a mere 15 months away. The Supreme Court has ruled that no BS IV vehicles could be sold after April 1, 2020. This means that OEMs cannot afford to overproduce BS IV vehicles in hope of selling them past the April 2020 deadline. The clock is ticking!

Consumers in India seem to be walking away from diesel cars, with market share slipping below 40% in the first half of 2018. This is consistent with trends in the European Union, where diesel sales seem to be falling. The price gap between new diesel and petrol cars will increase after BS VI comes into effect, so we should expect diesel market share to fall further in India. This should mean lower vehicular emissions overall, because BS VI gasoline cars would be cleaner than their diesel counterparts, although BS VI diesel cars should themselves be considerably cleaner than their BS IV counterparts.

One would have hoped that on-road NOx emissions from BS VI diesels will be close to what BS VI standards actually require. But we should temper our expectations, if not our hopes, because neither the Real-Driving Emissions (RDE) tests nor the in-use conformity requirements will go into effect until 2023, and more rigorous laboratory testing based on world harmonized test procedure (WLTP) has not even been adopted. In fact, the latest draft of AIS 137 containing RDE provisions suggests that India is not going to adopt some of the most important provisions of the European RDE regulation.

While diesel trends down, SUVs are trending up. Utility vehicles and vans are now nearly a third of the passenger vehicle market, and the share is rising, consistent with global trends. At BS IV levels, some heavier SUVs are actually subject to a more lax emission standard than lighter diesel cars—which themselves are subject to a less stringent standard than petrol cars. With BS VI, heavier diesel vehicles will no longer get a free pass when it comes to tailpipe emission standards. From the fuel efficiency and greenhouse gas emissions perspectives, however, the heavier vehicles are subject to less stringent requirements. The rising market share of utility vehicles not only increases air pollution in the near term, but also makes it more difficult to reduce greenhouse gas emissions going forward.

This is what we saw in FY 2017–18, which was the first year of compliance for the passenger vehicle fuel efficiency standards. Average new vehicle fuel efficiency barely increased between FY 2015–16 and FY 2017–18. The good news is that at 121 gCO2/km, new passenger vehicle CO2 emissions are nearly 9% below the FY 2017–18 standard, and only about 8 percent above the FY 2022–23 standard of 112 gCO2/km. But average new cars in the European Union will reduce emissions closer to 95 g/km by 2021, and a further 35%–40% reduction by 2030 expected. India’s vehicle efficiency standards will have to tighten significantly to keep pace.

From the climate change perspective, every year vehicle efficiency fails to improve significantly it becomes more difficult to achieve long-term climate targets. In a fast-growing economy like India's, even with an all-out effort to maximize fuel efficiency gains and accelerate vehicle electrification, greenhouse gas emissions from road transport may not peak until mid-century—and then at nearly twice the present level. Without such an all-out effort, greenhouse gas emissions from road transport will be nearly four times the present level in 2050.

In the near term, lack of progress on fuel efficiency hurts each time there is a noticeable increase in international oil prices. In 2018, when such a price increase coincided with a fall in the Indian rupee against the US dollar, the pain at the pump was felt broadly, and served as a reminder of risks of depending on imported petroleum.

Electrifying the vehicle fleet rapidly could serve as a hedge against all three problems—air pollution in our cities, rising greenhouse gas emissions, and dependence on imported oil—and perhaps even a solution. Electric vehicles have the inherent advantage of having zero lifetime tailpipe emissions – no PUC check required! And though India’s electricity is currently fairly carbon intensive, grid emissions will decline as more renewables come online. So electric vehicles purchased today will have a decreasing lifecycle emissions impact over time, something not possible to achieve with other types of vehicle.

Nevertheless, electric vehicles remain outside the reach of most consumers, for two main reasons. First, not enough electric vehicle models— two-wheelers, or passenger cars, or commercial vehicles—are available in the market. Second, those that are available remain expensive compared to functionally similar internal combustion engine vehicles.

Fortunately, advances in battery technology and accompanying price reductions have been more rapid than most of us anticipated even five years ago. As a result, the total cost of ownership of electric vehicles is fast approaching that of the ICE vehicles. More, many state governments have established fiscal incentives on top of the central government’s FAME incentives. The draft electric vehicle policy announced by the Delhi State Government just a few weeks ago is a case in point. It proposes a combination of pollution cess, parking surcharge, road tax, and congestion fee that will apply to diesel and petrol vehicles (with higher fees for diesels than petrol in general). Revenues will be used to subsidize purchases of electric vehicles and fund charging infrastructure. (See ICCT’s comments on the Delhi policy here.)

While state governments can offer fiscal incentives, they cannot make vehicle manufacturers bring more EV models to market. Consumers will need to see viable and competing electric vehicle models across all market segments before they will consider EVs as their vehicle of choice. India’s vehicle fuel efficiency standards are nowhere near stringent enough to make most manufacturers bring any EV models to the market before 2023. As experience from California, China, and now Europe and Canada shows, some sort of electric vehicle production mandate is necessary in the absence of stringent fuel efficiency regulations. Such mandates ensure that all manufacturers are populating the EV marketplace even before the cost of electric vehicles reaches parity with ICE vehicles.

The clock is indeed ticking!

This is an abridged version of article that appeared in Auto Car Professional Magazine’s December 15, 2018 issue.