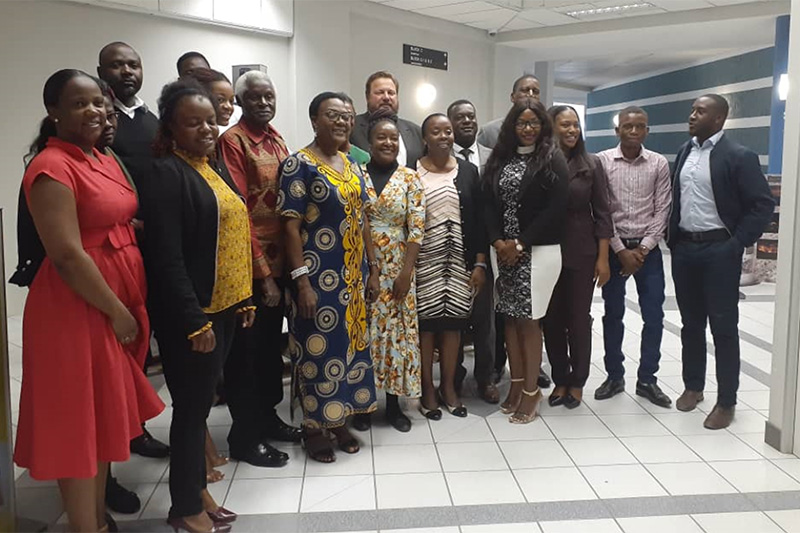 Participants at the Namibia workshop.

“If we act now and if we act decisively, further global warming can be limited and this should be our goal.” This was the message by the Deputy Minister of Mines and Energy, Hon. Kornelia Shilunga, during the opening of a GFEI national stakeholder workshop on fuel economy baseline findings in Namibia that was held on 30 September 2019.

She spoke of Namibia’s committment to the Paris Agreement where increased energy efficiency, mass transport and car pooling were identified as possible measures to reduce greenhouse gas emissions from transport. She emphasised that climate change is real and countries including Namibia have a role to play through right policies before it is too late.
The fuel economy baseline study in Namibia was funded by the FIA Foundation, which hosts the Global Fuel Economy Initiative. UN Environment, another of the six GFEI partners, organized the workshop in collaboration with national stakeholders. The objective of GFEI is to support countries to analyze the fuel economy of their fleet to inform policy formulation, supporting SDG 7.3 on doubling the global rate of improvement in energy efficiency by 2030, and cutting carbon emissions. Mr. Kondjeni Ntinda of the Namibia Energy Institute who coordinated the baseline survey observed that even though there were slight improvements in the fuel economy of vehicles imported into Namibia over time, there was need for more concerted effort to attract even more efficient cars into Namibia. The average fuel economy of cars imported into Namibia in 2018 was 6.7 litres/100 kilometers compared to 8.3 litres per 100 kilometers 2005. Ms. Jane Akumu of UN Environment gave some examples of policy support that Namibia could adopt to improve its fuel economy including fiscal measures and consumer sensitization programs.
Participants recommended the inclusion of heavy-duty vehicles in the country survey, as well as outreach to the youth since they will play a significant role in mobility in future. Vehicle labeling was identified as a quick win for the country that could be implemented in the short term.
Full speech of the Namibian Deputy Minister of Mines and Energy, Hon. Kornelia Shilunga