May 6, 2022 by Global Fuel Economy Initiative 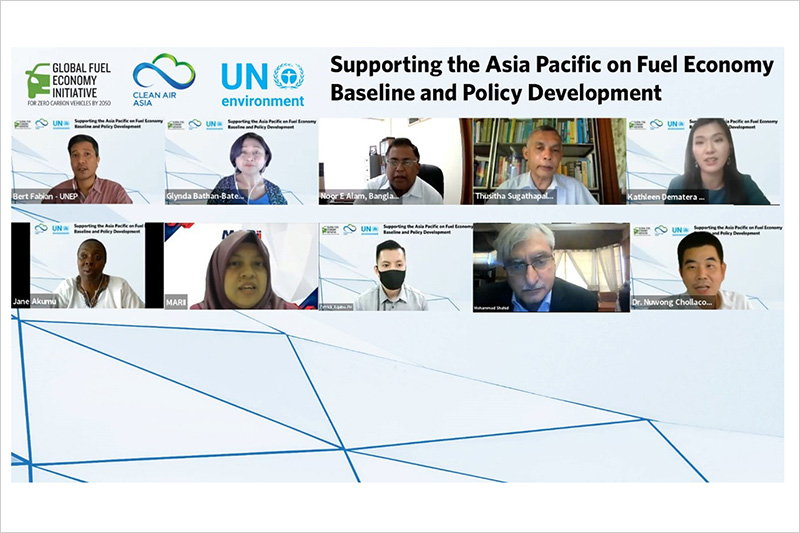 GFEI partners attended the webinar on how to understand vehicle emissions.

GFEI partners UN Environment Programme (UNEP) and Clean Air Asia recently organised a webinar on how to understand vehicle emissions. The event brought together thinktanks and experts from across the Asia-Pacific region (and beyond) and highlighted the importance of developing a fuel economy baseline.

The event aimed to accelerate the development of ambitious measures to reduce vehicle emissions through a knowledge exchange on successful policies and initiatives to improve fuel economy. These policies can save money and also form an important stepping stone in transitioning to zero emission vehicles and electric mobility.

The first half of the session highlighted the instrumental role of light-duty vehicles (LDVs) - the number of which continues to grow, particularly in developing markets - in fuel economy baseline development.

It is imperative that we know what kind of vehicles are coming to our countries now so that we can put in place policies to make sure that future new vehicles - in 2-3 years’ time - will be more efficient,” said Bert Fabian, UNEP Programme Officer.

Sheila Watson, Director of the FIA Foundation, stressed the importance of partnerships between the countries to promote a more efficient and cleaner vehicle fleet.

“As GFEI we are supporting the maximum possible efficiency of the vehicles on our roads across the globe, be they heavy or light duty vehicles, 2- or 3-wheelers, or buses. This is an essential under-pinning in achieving the Paris goals set for 2050,” she said.

The subsequent discussion highlighted the difficulty of acquiring the necessary vehicle information for fuel economy analysis as a common challenge experienced by countries around the world. The sorts of issues which were highlighted included:

The webinar concluded that there is a need for the proactive participation of the government institutions in pushing through the development of fuel economy and its corresponding policies. Further, public support must also be sustained through increased awareness campaigns and stakeholder consultations. The event was supported by the Global Fuel Economy Initiative (GFEI), the FIA Foundation, the Global Environment Facility, and the European Commission.