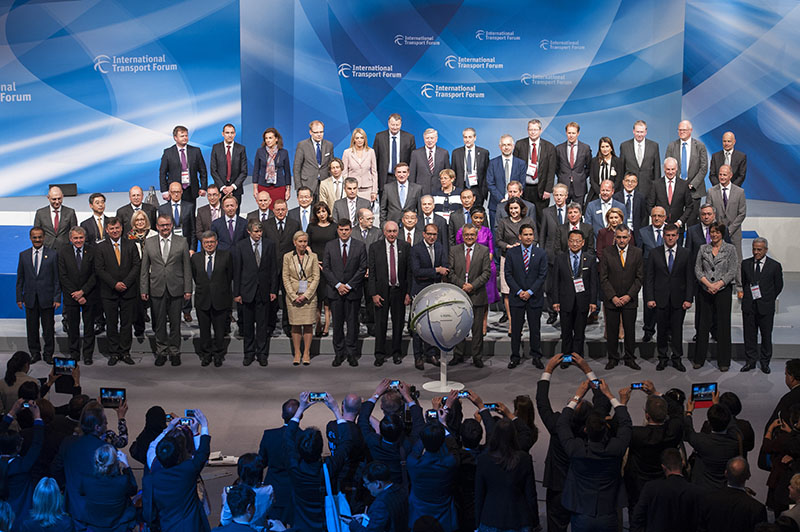 More than 60 transport ministers gathered in Leipzig for the event

An annual OECD meeting of transport ministers has heard a call for action at the forthcoming Paris Climate Summit from the Global Fuel Economy Initiative (GFEI).

Sheila Watson, the FIA Foundation's Director of Research and Environment, presented GFEI's work, and COP21 commitment '100for50by50'* to the International Transport Forum's gathering of over 60 transport ministers in Leipzig on 28th May 2015. During the presentation, which was focused on issues around transport, tourism and climate, contributions were also made by Michelin, and member states including Russia, Ukraine, Norway and the United Kingdom.

The influential gathering heard from Sheila Watson about the unsustainability of the potential tripling of the global fleet by2050, with 90% of that growth in what are currently emerging economies - 'Unsustainable in terms of congestion, pollution and health; in terms of energy supply and therefore energy security; in terms of resource waste at an individual and national level; and of course in terms of CO2 and the climate.'

Describing the The Global Fuel Economy Initiative (GFEI) work as 'practical, measurable, capacity-building and has multiple benefits' Sheila Watson outlined the 50by50 target, and the benefits which achieving it would bring, namely 2 gigatonnes of CO2 (from 2050), and $2 trillion (net) in un-used fuel by 2025 - resources which could be used elsewhere in hospitals or schools, or to promote new mobility solutions.

'So improved fuel economy is a win-win, and yet the world is not yet on track even to reach our targets, particularly not in the growing markets outside of the OECD - and that is really worrying.

We must take advantage of 2015 as a huge opportunity to achieve a step change in action. The UN's post 2015 framework, G20 energy efficiency action plan, Sustainable Energy for All, and the Lima-Paris Transport Action Agenda for COP21 are all building vital political momentum for improved fuel efficiency.

GFEI is building on our Climate Summit commitment - and we need your support. We are engaged with 50 or so countries now, but we want to use the political opportunities offered by 2015 to double that number. Our campaign - '100 countries for 50by50' - which was launched here in Leipzig yesterday is a great opportunity for countries, corporates, consumers and civil society to really step up. We aim to report some successes towards this by COP21.

In order to build momentum towards this, GFEI will host a global networking event in Paris on June 11th-12th. The meeting will be attended by 67 countries eager to share their experiences, and learn more about the issue. Countries such as Chile, which with our help, recently introduced it’s first ever fuel economy policies.It is just one of several ways in which we will be reaching out in order to build our network.Countries which work with us to improve their fuel economy will realise resource, health, economic, financial and CO2 benefits, at the same time as helping to put the world on a path to more sustainable mobility.

We are really excited by the opportunities which this year will bring, and I hope that you share in that enthusiasm and join us in our work'