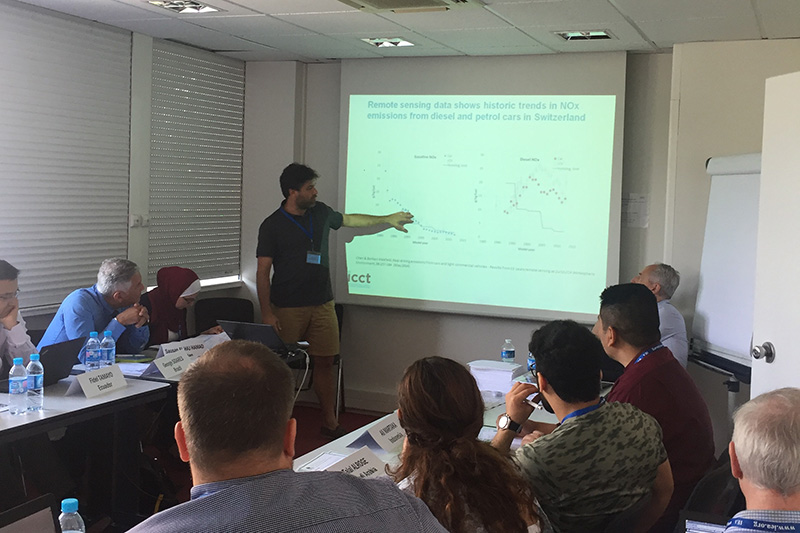 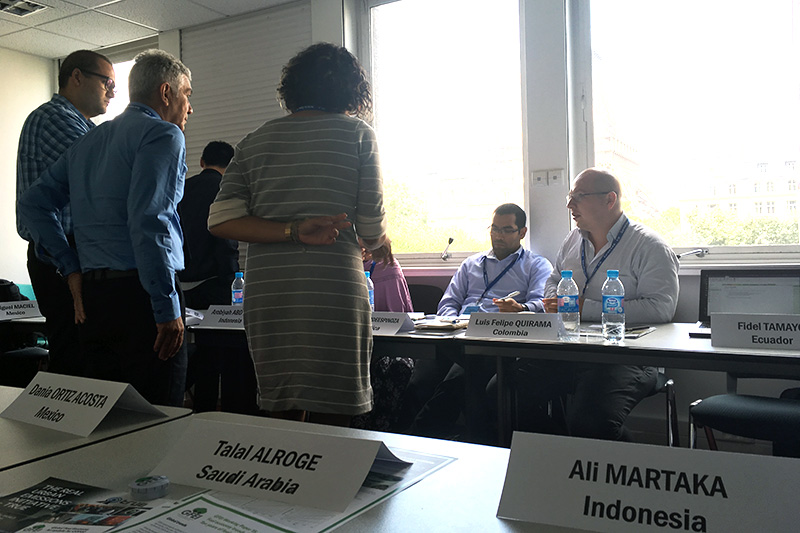 On 15th June, GFEI partners provided focused fuel economy training to participants from around the world as part of the IEA’s Energy Efficiency in Emerging Economies (E4) week in Paris.

Pierpaolo Cazzola, Senior Transport Analyst at the IEA introduced the day and its focus on improving the energy efficiency of vehicles. He highlighted the aims and objectives of GFEI, including the target to double average fuel economy of new vehicles by 2030.

Lew Fulton of UC Davis gave participants an overview of the different tools available to policy makers to improve fuel economy, such as standards, labelling schemes and taxes. He gave examples of how this can work in practice, such as Sri Lanka’s successful promotion of hybrid vehicles through differentiated excise duties. He helped participants understand the differences between standards that have been implemented in different regions, and the strengths and weaknesses of each approach.

Marine Gorner shared the IEA’s latest analysis of trends in the numbers of electric vehicles. In 2017, the number of EVs have now reached over 2 million worldwide. Her presentation highlighted the continued importance of government incentives, including city-wide restrictions promoting EVs in China, and tax incentives in countries such as the Netherlands.

Next Pierpaolo Cazzola of the IEA led in-depth training about implementing fuel economy policies. He explained how to conduct a baselines analysis of a country’s vehicle fleet, which can be used to inform the design of schemes, and apply cost-benefit modelling of different options. He also highlighted the importance of monitoring and enforcement to ensure that vehicles on-road performance matches those achieved in laboratory testing. The TRUE initiative is working with cities including London and Paris through remote sensing.

The participants split into two groups to apply their learning by discussing a scenario. They were set the task of agreeing a plan to propose to a government minister to improve a country’s fuel economy. Participants explored the strengths and weaknesses of different options, such as vehicle scrappage schemes and import duties on used vehicles and fed back their findings.

Finally, Stephen Perkins of the International Transport Forum gave a presentation outlining the role of fuel economy policies for Heavy Duty Vehicles (HDVs). He highlighted the additional complexity of HDVs when it comes to assessing fuel economy, because of the wide range of characteristics, and the potential for improving logistical efficiency. However, there are many standards that governments can introduce to improve vehicle design and improve efficiency, and the discussion focused on how to implement these.

The GFEI day formed one day of a week of focused energy efficiency training, as part of three days focused on the transport sector. It followed two previous days that focused on ‘avoid’ and ‘shift’ policies to reduce vehicle trips and promote low-carbon alternatives. Participants were predominantly from fast-growing emerging economies who will take back their lessons to share with colleagues. The aim is to build capacity to support aims to significantly improve energy efficiency, saving money, improving energy security and reducing carbon dioxide emissions from transport. This year, E4 regional training events are also taking place in Asia, Eastern Europe and Latin America which GFEI is also supporting.